A Walk Down Memory Lane

Macedonia Missionary Baptist Church was founded in 1887 by Rev. J. O. Blackman.  The church was located on a property known as “Goodman’s Place” (off HWY 73 West) in a two room house.  During these early years, Sunday School was conducted every Sunday but worship service was only held two Sundays of the month.
​
In 1903, the present site was purchased and a the first sanctuary was built under the leadership of Rev. Barnett.  In later years Rev. Horton would serve as pastor.  In 1911, Macedonia called Rev. W.W. Gist, who helped developed the educational and spiritual needs of both the congregation and the local community. Rev. Gist was a minister as well as a school teacher. He extended himself to teaching the children. Later a church parsonage was built.

Over the years, the church continued to make great progress under the leadership of Rev. Milton, Rev. Morgan, Rev. Burns, Rev. Heilig (1937), Rev. Boyce(1944) and Rev. Murray(1945).  Under the leadership of Rev. Murray the church was remodeled.  In 1960 under the pastorship of Rev. C. Brown a “more modern facility” with a basement, kitchen and classroom space was built.  This building was dedicated and officially entered into on the first Sunday in April of 1962.

In 1971, Rev. Sampson Long answered Macedonia's pastoral call. During his tenure as pastor he organized the Deaconess Board, Pastor's Aides, and he was instrumental in the purchase of new hymnals, installation of a mural over the baptismal pool and landscaping the grounds. Rev. Long served as a mentor to the following associate and assistant ministers;  Rev. John Cathcart, Rev. Willie Teague, and Rev. M.T. Williamson. 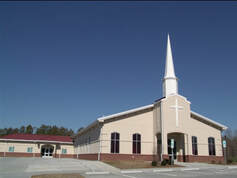 Pastor Leazer had a vision! A vision for a new sanctuary. The very essence of leadership is that you have to have a clear vision, and under the leadership of Pastor Leazer a massive building fundraising project was introduced. With the help and support of many church members and fundraisers, enough money was raised to begin the work on the new sanctuary. Ultimately, a new million dollar facility was constructed! He led his congregation into the new sanctuary on the first Sunday of November 2005.

We truly thank God for being in our midst and keeping us together as a church family!